Who is Henry Hughes? 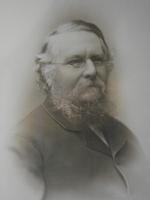 His practical training began at a mechanical engineering works where he specialised in steam locomotives and steam trains. The Hughes steam engine can still be seen in museums in the United Kingdom. This led to an involvement in the construction of the SS Great Eastern – the largest ship ever built at the time of her launch in 1858 – and a short spell assembling machines for the great International Exhibition held in London in 1862.

Throughout this time, Henry Hughes was also busy creating his own inventions and protecting those inventions through the patent system. One of his inventions was a means for the disposal of smoke from locomotives. A patent was granted for the invention in 1864 and was the subject of litigation involving infringement of the patent. It was experiences such as this which would later prove invaluable.

By 1866, Henry Hughes had set up an engineering works in Loughborough, Leicestershire, England. The works specialized in steam locomotives and tram engines and met the needs of expanding British railway companies.

In the 1870s, Henry Hughes emigrated to Wellington, New Zealand with his family, aboard the Koranui. He continued his work in railway engineering in the Hutt Valley and then in Nelson, before returning to Wellington.

With an interest in and an understanding of patents, gained through the experience of protecting his own inventions in the United Kingdom and his involvement in litigation to enforce at least one of his patents, Henry Hughes was ideally qualified to meet the growing need for a patent specialist in New Zealand.

Thus, in 1882, Henry Hughes commenced practice as New Zealand's first patent attorney.  On 26 February 1890 Henry was the first person in New Zealand to be registered as a Patent Agent under section 126 of the Patent, Designs, and Trade Marks Act, 1889.

Adopting his new profession did not curtail Henry Hughes' inventive activities and in 1883 (at a cost of 10 shillings) he was granted New Zealand Patent No. 949 for a novel steam injector.

Henry was a hard working man with a twinkle in his eye, as shown by this interview of him that was published in "Fair Play" on 9 December 1893.

Mr. Hughes advertised his services widely in the regional newspapers and as well as the Wellington head office there were branch office of his firm in Auckland, Christchurch, Dunedin and Invercargill. Mr. Hughes' pamphlet, “Advice to Inventors” was in much demand, and contained valuable and interesting information to inventors and patentees.