We are pleased to congratulate Elena Szentiványi on being named president of New Zealand Intellectual Property Attorneys Inc (NZIPA).

NZIPA, formerly known as the New Zealand Institute of Patent Attorneys, Inc., is New Zealand's professional body for patent and trade mark attorneys which advocates in New Zealand and Australia to advance IP rights; provides education programmes for its members and offers information and support to its members.

Elena has been a member of NZIPA's Council for 11 years and previously held the position of vice president and steps into her two year term as president with the aim of ensuring NZIPA meets the needs of its changing membership. Elena says "There have been significant changes to the NZIPA membership over recent years with a growing number of small firms, an increase in the number of in-house counsel and changes in the qualification pathways. It is important that NZIPA meets the needs of its members so I plan to build on the work of previous Councils to increase engagement with members, external agencies and to increase the visibility of the profession to the public".

Elena is a Director of Henry Hughes IP Ltd and Henry Hughes Law Limited with over 20 years' experience working with local and global businesses in the development, establishment, management, exploitation and enforcement of intellectual property rights, specialising in trade marks and domain names. Elena qualified by examination as a Trade Mark Attorney in Australia in 2009. She is also registered as a Patent Attorney in New Zealand and Australia.

Elena has been selected for inclusion in the World Trademark Review 1000 (WTR 1000), a publication featuring tiered rankings of the leading trade mark practitioners and firms around the world. Elena is described in the 2019 edition as having been an influential voice on the New Zealand trade mark scene for over 20 years. "Extremely capable, she gives solid advice and is a safe pair of hands, she really fights hard for her clients' best interests." Elena has also be included in successive editions of Trade Mark Expert Guides.

Since 2017 Elena has been a supporter of SheEO​ - a global community of radically generous women transforming the way to finance, support and celebrate female entrepreneurs who are creating a better world. 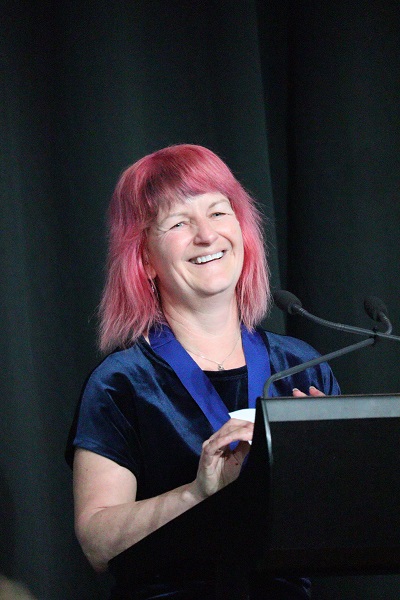 Elena giving her inaugural speech as president of NZIPA at the AGM held in Wellington on 6 August 2021.