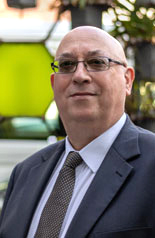 Frank Callus qualified as a UK and European Patent Attorney before joining Henry Hughes in 1986. He became a Director of Henry Hughes in 1991. He has a bio-physics background and, with the experience gained in English and European Patent Law, prior to joining Henry Hughes, has over 30 years experience in Intellectual Property Law. Frank works with a network of global colleagues and experts to service a wide range of clients. His major focus is in the area of patents (mechanical engineering & chemistry), and trade marks.

Frank is a past-President of NZIPA having served on the NZIPA Council for 12 years. He is also a past-President of the NZ group of APAA and a New Zealand representative on the APAA Council. From 1999 - 2004, Frank was a member of the Examination Board for NZIPA and has been appointed again since 2006.

At a Joint Forum of FICPI and APAA in New Delhi in 2000, Frank presented a paper on the Patent Co-operation Treaty, and was a panel member in a PCT workshop at the APAA General Assembly in Thailand in 2012. He is co-editor of the publication, An Intellectual Property Guide for Life Sciences in NZ 2004. For a copy of this publication please contact Frank.